When I was feeling a bit cranky about this topic, I wanted to call this piece "Yet Another Reason to Insist that Your Child Participate in Whole-school Activity Days," but I decided to spin this in a more positive direction.

Friday, May 31 was one of those big deal days that require a huge amount of organization, go by fast, and leave all the adults involved feeling like they've been hit by a train. Juniors and seniors had a day of activities designed to help them understand and deal well with the big world that awaits them--a play and discussion groups about consent, and a variety of choice activities. The day had been planned and organized by a group of 15 students in response to community, faculty, and student input. It's a great example of our school's willingness to innovate, take risks, and be flexible.

The ninth and tenth graders had an advisory community service day: nearly 20 advisory groups were heading out into the community to do work for various non-profits like free meal sites, food pantries, day cares, senior housing, Acadia National Park, the SPCA, and others.

I have sophomore advisees, and I was not looking forward to the day. The weather forecast was grim, the black flies had managed, despite the chill, to be terrible, and this kind of day requires an unyielding cheeriness before and during the actual day that is exhausting. I was not filled with excitement as May 31 approached.

However, I knew I (along with many of my stalwart colleagues) would do it: I knew I'd stuff hats and bug spray and work gloves and sunglasses and a few spare bandaids and extra water bottles and several kinds of sun screen and granola bars and every spare sweatshirt I could find into a bag and schlep it into school. And as I was putting that bag into the car, I'd turn around and add extra trowels and four bandanas and a few hair elastics and three pairs of gardening shears and two rubber balls and a Frisbee into another bag, too. Because, deep down, I knew what would happen--and it did.

We gathered in the gym, played catch while we waited for our bus, then rode the bus to our garden worksite, where we worked our tails off. We filled wheelbarrows, pushed wheelbarrows, emptied wheelbarrows into raised beds, learned not to fill wheelbarrows too full, raked dirt, pulled weeds, dead-headed flowers, emptied weed buckets, swatted flies, ate approximately 5000 granola bars, got blisters, took turns, entertained several elderly residents with our antics, and astounded the staff with what we got done. We left behind six filled raised beds ready for planting and an existing garden tidied, weeded, raked, and refreshed for the growing season to come.

And we did it together. We amazed each other and ourselves with our ability to work, and we chatted and laughed and groaned and ate together. Tired, sweaty, and bug-bitten as we were on our return, we were a closer, prouder, stronger group than before. I am proud of my students, they're proud of themselves, and the people we worked for were blown away by the work we accomplished. The magic that happens every year from hard work and engagement happened once again.

But not everyone was there. Some of the students who asked, "Why do we have to do this?" or "Why don't we get paid for our work?" or "Why should I work for that library? I never use it," didn't come, and while they maybe got to sleep in, or avoid some blisters, or work a few hours for more money, they sure missed out on some important lessons. Likewise, many of the seniors and juniors didn't come. Many of all those students were dismissed by their parents since this "wasn't a school day," or "it's just pointless."

However, the spirit in the school when the advisories were back and discussing their work and the upperclassmen were talking about the fun they had in their workshops made it clear that this had been an important day in the life of our school community. Some of us had worked hard physically, some had gone outside their comfort zones to do work they weren't used to with people they normally wouldn't hang out with, and some had simply shown up to participate in a new activity. We had all acknowledged our shared community: ninth and tenth graders working as advisories, and giving back to various aspects of our community as a thank you for all our community does for us; upperclass students trusting the effort their peers had put into the Healthy Trojans Festival and engaging in the experiences offered them. If "showing up is 80% of success," those students succeeded. Our school, our advisories, our community, and our students are stronger because of that fact. We are better together. 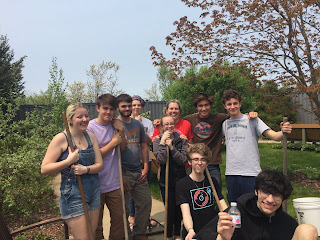 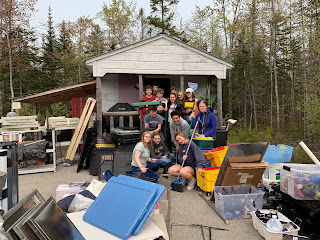 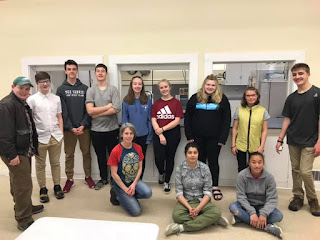 (Advisory pictures added as I get them!)

Posted by leamonteach at 11:55 AM No comments: